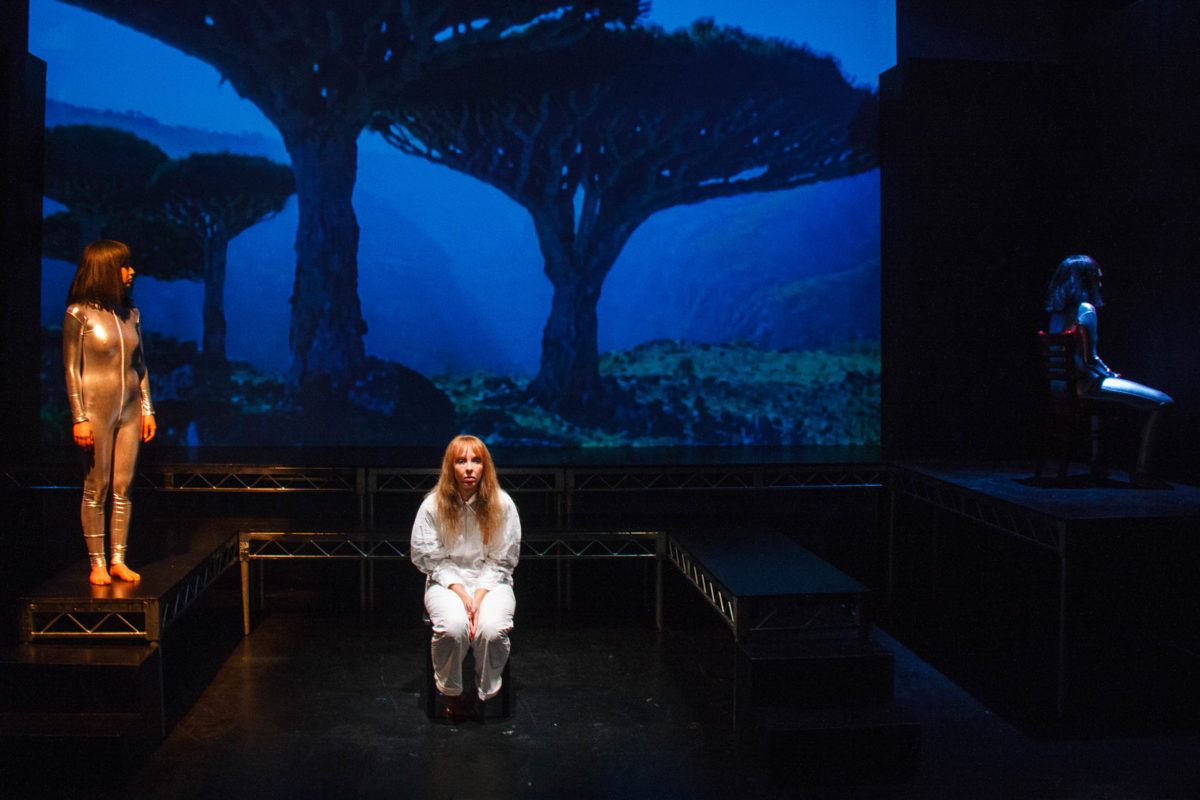 Irene awakes from a cryogenic chamber into a future where her terminal cancer has been cured but the world as she knew it no longer exists. She is welcomed by curious humans who command and are commanded by “Platform,” a vast computer network which appears to have replaced all known reality. Has the Singularity occurred? Is there still a recognizable planet where earth once was? In Wake Dahlquist examines society and sociability when lives are long, wants are met, and no need for cooperation beyond the response to solitude.

World premiere by the author of the international bestseller “The Glass Books of the Dream Eaters.”

Irene awakes from a cryogenic chamber into a future where her terminal cancer has been cured but the world as she knew it no longer exists. She is welcomed by curious humans who command and are commanded by “Platform,” a vast computer network which appears to have replaced all known reality. Has the Singularity occurred? Is there still a recognizable planet where earth once was? In Wake Dahlquist examines society and sociability when lives are long, wants are met, and no need for cooperation beyond the response to solitude.

Accorrding to the dictionary, “wake” can mean different things: It can be the vigil held over a corpse on the eve of burial; it can describe the waves trailing a passing ship or left by an extinct civilization; or it can signify the state of being aroused or made aware. According to Wake, Gordon Dahlquist’s rousing sci-fi satire about the ultimate fate of humankind, currently getting a sleek world premiere at City Garage, it also can mordantly embrace all of the above.

The time-leaping tale begins with a venerable science fiction premise: Heroine Irene Suarez (Natasha St. Clair-Johnson), a New York immunologist racked with metastasized pancreatic cancer in 2017, is placed in a cryogenic capsule in Mamaroneck, New York, to be thawed and resuscitated in a hermetic and inconceivably remote future.
In production designer Charles Duncombe’s minimalist arrangement of tiers and ramps, that future is represented as a blandly featureless room without windows or doors. It’s where Irene is greeted by May (Alicia Rose Ivanhoe), a friendly and curious if somewhat linguistically maladroit denizen whose silvery Lycra bodysuit (courtesy of costumer Josephine Poinsot), together with the ever-present visage of an identically coiffed and clothed figure (Megan Kim) projected on the upstage wall, are the first hints that something Orwellian and technologically dystopian might have transpired during Irene’s eons of sleep.

Much of the fun comes from Irene’s attempt to reconstruct the lost years. While May proves maddeningly vague at filling in the whens, wheres and hows, the fragmented hints at the planet’s fate that begin to emerge only increase Irene’s disquiet over her dire predicament. It seems that the Holocene is part of a distant and dimly understood past, whose end came via some sort of climate change–triggered environmental cataclysm. In the desperate hope that one day the species could be reconstituted from its archived DNA, a survivor population designed a global computerized omniscience called the Platform. Embodied by City Garage regular Kim as an affable and accommodating “construct” of the same name, the Platform now regulates the “sentient environment” as well as the society by which Irene finds herself welcomed as a sort of living natural history museum exhibit.

By eliminating the human middleman, society is finally one with the spectacle.

If that all sounds vaguely Matrix-like, the similarity is strictly ironic. Wake trades in — and frustrates — a raft of familiar sci-fi clichés and genre expectations in a wry pastiche that sets the stage for what Polish sci-fi master Stanislaw Lem once called “the drama of cognizance.” By dropping Irene into the Platform, where she is stripped of the taken-for-granted assumptions that ground identity and differentiate the real from the merely represented, Dahlquist lampoons the collective solipsism of all institutionalized systems of belief while underscoring the philosophical problem of agreement on any kind of shared reality.

Irene does not connect with other remnants of humanity in order, say, to organize a revolt and take back the planet from authoritarian oppressors, a trope dating back to H.G. Wells’ The Sleeper Awakes (1910), the grandaddy of Matrix-like political fantasies. Instead Dahlquist closes off that possibility by eliminating not only the distinction between the real and the virtual but also the urgent need to distinguish it. The Platform proves the most hospitable and accommodating of hosts. Far from a prison, its environment is a constantly morphing place of endless choice and instantaneous gratification — a kind of otherworldly shopping mall from which everything unpleasant has been expelled except for loneliness. Its virtually generated inhabitants, like May and her daft friend Sen (Jeffrey Gardner), are left to contentedly while away their existence with trivial preoccupations around satisfying their every whim and appetite. By eliminating the human middleman, society is finally one with the spectacle.
The only exception proves to be Sarah (Sandy Mansson), another cryogenic survivor from Earth’s 21st-century past — or, more accurately, the Platform-generated memory of what 40 years ago had been Sarah. A middle-aged horse breeder from Pennsylvania, Sarah tells Irene about the 60 additional years she lived among the Platform before boredom finally drove her from its protected, Platonic environs and into the nonexistence of the outside world. What happened then, or what kind of creatures might live there, the Platform cannot say, although Duncombe’s evocative projections of pristine, primordial landscapes slyly suggest an Earth that has returned to the fecund grandeur of a pre-human natural state.

Director Frédérique Michel’s tightly composed staging cannily extends the script’s mechanistic absurdities, both through wittily synchronized movement between Kim and the constructs and with touches like returning “offstage” characters to visible seats in the wings, where they await their next scenes like powered-down cyborgs set to sleep mode. Ivanhoe and Gardner are delightfully deranged as bubbly, wide-eyed human simulacra, but Ivanhoe is especially funny massacring Dahlquist’s fractured, almost aphasic diction. For her part, St. Clair-Johnson nimbly anchors the comedy as an exasperated, disoriented and finally resigned “straight man,” while Mansson contributes poignant notes of human warmth.

Although the ensemble is clearly still fine-tuning its timing, and Wake is consequently guilty of what sometimes feel like overly austere intellectual stretches, the evening’s momentum rarely flags. More importantly, at a moment when headlines seem to trumpet the potential calamities of debasing public policy with alternative facts, the play comes as a timely reminder that the confrontation with the other is ultimately always a confrontation with the self.

Audience expectations tend to be tricky things. To some degree this depends upon genre.

Wake by Gordon Dahlquist, if not science fiction, certainly begins and explores a pretty clear and well precedented science fiction trope. Someone wakes from cryogenic sleep far into the future and must adjust. Buck Rogers essentially.

Irene (Natasha St. Clair-Johnson) had advanced pancreatic cancer and used her resources on a wild chance, that someone frozen in liquid nitrogen just might be revived in later centuries. When she wakes in a strange room to the greetings of May (Alicia Rose Ivanhoe), a cheerful young woman with a strange vocabulary, the truth dawns on her pretty quickly. It worked. Behold the future!

At this point many a science fiction tale would begin describing the future world, if in fact the story turns out to be some kind of social commentary on the trends of human society. Or it may become some kind of adventure in which the awakened person will prove crucial to history or some such (this was the story of the second JJ Abrams Star Trek movie). I never thought the latter very likely here, but wondered how the first part of that expectation might play out. That at first May seems reluctant to tell Irene much heightened that expectation. At first. But increasingly, as we get to know more about this future, the less terribly important that became. Details all proved important, but not what the story was about.

Irene began and remained the story’s focus, for every moment, and she remained the only character on stage the entire play. All seventy minutes with no intermission. Even as we meet the sentient computer (or something like that) called The Platform (Megan Kim) that both runs and enables, nurtures and learns from the lives of those like May and her would be boyfriend Sen (Jeffrey Gardner), the more we share Irene’s curiosity and frustration. When is this? How much time has passed? Hints given early prove disturbing. Her capsule? Found in sea water. People have very odd beliefs about her own time, not least the amount of violence. No one, not even The Platform, knows what she’s talking about when Irene mentions ancient Egypt or the Pyramids.

Her world is gone. Her context has vanished, evaporated over time. Hardly anyone else was ever found frozen and with enough left to be revived. That was Sarah (Sandy Mansson) who died decades ago.

With us, Irene endures this loss — the realization of being utterly alone, not physically nor literally, but robbed of every single detail that made life make sense. Not by anyone, just by chance. This then proves the exploration, the odyssey of this work — not a revelation of plot or world-building, but of human courage in the face of tremendous loss. All in all, Wake does an astounding almost Haiku-esque job of giving us the heart, the soul of the story and very nearly nothing else.

We see someone find courage to go on. To trust the supremely unfamiliar. To begin to let go of what after all can never come again — the past.