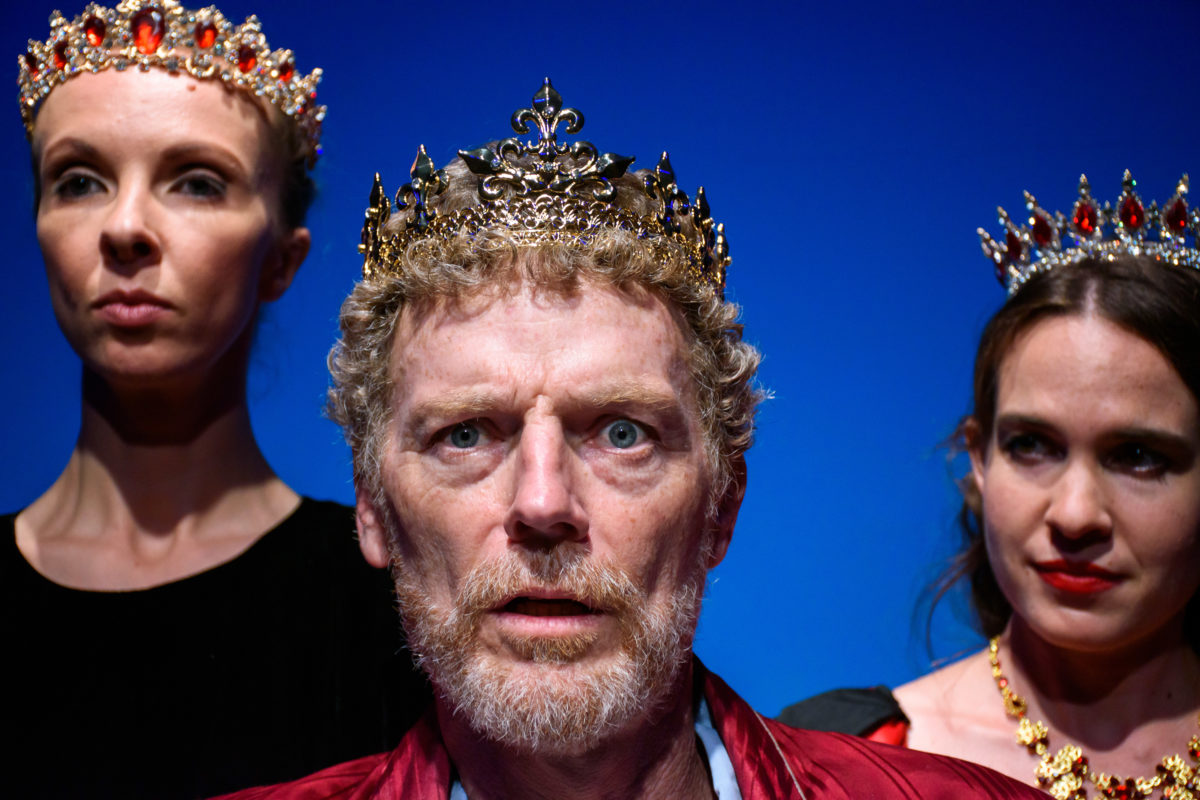 A deluded king. A failing kingdom. Two squabbling queens vying for his attention. An obsequious doctor. A dim-witted but loyal guard and a mouthy servant.

“Exit the King” by Eugène Ionesco

A deluded king. A failing kingdom. Two squabbling queens vying for his attention. An obsequious doctor. A dim-witted but loyal guard and a mouthy servant.

In Eugene Ionesco’s darkly comic masterpiece we witness the final hours of megalomaniac King Berenger the First. His monstrous ego has kept him alive for four centuries, but now, Queen Marguerite calmly informs him, the time has come to die. Berenger fights tooth and nail. He rages, pleads, denies, bargains, supported by the lovely and loyal Queen Marie. But Queen Marguerite, coolly efficient, aided by her henchman, the doctor, draws the king relentlessly closer to his final moment on earth.

At once broadly comic and deeply unsettling, the play alternates between Monty Python-style slapstick and haunting echoes of Shakespearean tragedy. In this, the most Beckett-like of all Ionesco’s work, we follow an existential journey into the most terrifying landscape of all: our own mortality.

In a new translation by City Garage founders Frederique Michel and Charles Duncombe.

“Why this? A once powerful, now collapsing civilization in the grip of a deranged megalomaniac? Obviously, it’s a scenario so implausible today, so far beyond the imaginative capacity of contemporary American audiences that we must treat it as a historical curiosity rather than, say, an urgent and eerily relevant warning.” — Read Margaret Gray’s “essential” listing in the Los Angeles Times

“Such a wild emotional roller coaster works, even amid the absurd details … because the cast under the direction of Frederique Michel breathes vivid life into what might easily have come across as utter chaos. Every detail makes sense.” — Read Zahir Blue’s full review at Night Tinted Glasses

“City Garage impressively pulls off a metaphysical play without any special effects other than Michel’s staging. Her direction is simple yet stylized, with a sprinkling of heightened movement and gesture. And while Exit the King’s technical design is minimal throughout the show, its final image is arresting and haunting thanks to Duncombe’s lighting.” — Read Taylor Kass’s full review at Stage Raw

“The final scene between the resonant Dunn and cool, elegant, swan-necked Natasha St. Clair Johnson … is one of those theatrical moments that … leave[s] audiences holding their collective breath before a well-deserved exhale and wild applause.” — Read Ravi Narasimhan’s full review at Backscatter.

“Their new translation (and adaptation) is crisp and colloquial, easy on the ear. And they have mounted the play in equally vibrant fashion… As performed with heart-breaking power by Troy Dunn, The King is vain, confused, self-centered, yet all too human and likable…” —Will Manus’s full review atTotal Theater